Esther brought us the word on 18 November. She observed that Don’t we just love our buildings,and asked what possessed the disciples?

24 hours before … Jesus is leaving the temple for the last time. Esther thinks Jesus was weeping inside. The building would be nothing in future. Jesus takes them to the Mount of Olives a fruitful place known for its abundance. Jesus knows this is the last opportunity for Him to share wirh his friends what will happen. The temple was a place for the poor , it was not a place for robbers and people to take advantage and Jesus had already thrown out those who sought to take advantage.

Esther came across a fantastic welcome statement St Paul’s church in Covent gardens. This is sometimes known as the Actors Church. They use the same welcome notice as Coventry Cathedral and we’ve decided to also display it as well in our entrance hallway.

Esther also thought she should extend a special welcome to those in need of prayer right now.

The Gentiles were not welcome,  the temple at that time was an exclusive god full of people who were not full of the heart of god. They were missing the point of the temple as a house of prayer to welcome everyone. God’s temple had become man’s institution. We find Jesus sitting on the Mount of Olives. He’s looking down on the temple. The disciples realised that they got it wrong in a big way. Herod remodelled it how he wanted it yet within 7 years of him finishing it was destroyed.

David them read Jesus last message to the disciples. Esther asked us to close our eyes and imagine ourselves on the Mount of Olives
Mark 13:3-8 NIV
[3] As Jesus was sitting on the Mount of Olives opposite the temple, Peter, James, John and Andrew asked him privately, [4] “Tell us, when will these things happen? And what will be the sign that they are all about to be fulfilled?” [5] Jesus said to them: “Watch out that no one deceives you. [6] Many will come in my name, claiming, ‘I am he,’ and will deceive many. [7] When you hear of wars and rumors of wars, do not be alarmed. Such things must happen, but the end is still to come. [8] Nation will rise against nation, and kingdom against kingdom….

Be prepared is what Jesus says. We need to live as if we are in the last days, share the love of Jesus as we go through life as Christians as friends families and colleagues. He died for each one of use whether we know it or not. Jesus became the temple and gave us access to God. Describes the pain of child birth that all who are mothers can recognise. Yet the reward of the birth of new life means everything. When we see the changes in society, persecution and war we need to bring Jesus to others. We need to be careful that we don’t take salvation for granted. Today is the day for prayer for the persecuted churches. We don’t know that personally but we’ll show a video that sheds more light on that . We remember the case of Asia Bibbi tried to get water from a well she asked the question to try to share her faith and to understand the point of view of other people. Despite a judge deciding she should be free she’s still not free as too many people want to kill her. When we know Jesus has rescued us this should help us to stand firm. The passage says whenever you are arrested and brought to trial the Holy Spirit will be with you.

So glad that when things come against we don’t need to worry.

Think about the wider world. Think about Terry H’s map showing how WVBC sits in the centre of a cross of the community. Think also about Terry W reflecting on the  people who made the difference to him. We need everyone on board to help people pray for those teaching out. Be encouraged, stand firm with our persecuted brothers and sisters.

Esther shared the situation her brother Malcolm is dealing with. He’s assisting in a court case in London to help an Iranian man prove he is a Christian! Imagine if we all 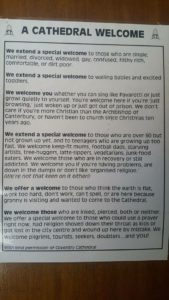 had to do this.