Johnny and Tim provided the music today. Tim led worship and brought us the Word from Daniel 6:1-27. This is the last in the highlights of the Old Testament that we have been exploring.

It’satrap. A play on words but a true statement none the less.

Sirius was king of Persia, a known historical figure. Tim showed slide of Sirius cylinder in British museum. Part of history. The Bible says that he appointed Darius yet no reference in historical documents. It does however demonstrate that Gods people at this point are far from home. 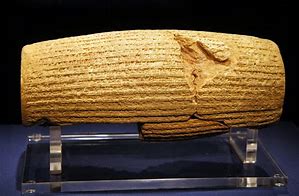 The fact we don’t find mention of Darius elsewhere doesn’t matter. The story is being told to God’s people to encourage them in a time of oppression. It’s a book of prophecy and encouragement. Reminds Tim of Joseph. Like Joseph in Pharaoh’s court, Daniel finds his way to the heights of Darius’s civil service. The satraps or chief officials are all jealous of each other. They seek to undermine each other. They want Daniel out because Daniel is going to be a prime minister. They need some false news. They dig for dirt and can’t find anything , nothing to tweet, Daniel is an example of one who is faithful, incorruptible. There’s a steady faithfulness here of a man walking with God. It’s why this story is told. Jesus said teach people to be disciples and to follow. Daniel did this. God just asks us to be faithful. Two ways to interpret this trap being set. One view is that you are only allowed to worship Darius, another is that Darius is the only one who can pray.

It’s a clever trap. It can’t be repealed.

Daniel doesn’t question or doubt, he simply continues to pray with quiet faithfulness . He bows to Jerusalem, perhaps this builds on Solomon’s prayer dedicating the temple he built in Jerusalem.   Daniel prays towards this place . And Jerusalem was the place God chose. The temple had been destroyed by the Babylonians. Yet those in exile turn to the city in hopefulness and longing. Daniel does this without hiding it . He opens the shutters of his room and prays openly. He simply continues what he has done every day. Looking for God to return the to Jerusalem. Jesus in the sermon on the mount instructs us not to be showy but simply to pray in private .Daniel’s pattern of prayer seems to match what Jesus asks people to do. The most faithful pray-ers that Tim has encountered he reflects are those who do this in the quiet and without fuss. When do you pray? Where do you go? On the commute? After the kids have gone to school? Have you found that place? We’re all different but we need to work into our daily routine a pattern like Daniel.

The satraps go and tell the king and reminds Darius he can’t change his mind. Darius hopes that God will save Daniel and tells him this.

Darius fasts and is unable to sleep. He has a worst time of it than Daniel. Daniel is in with the lions but has faith God will keep him safe. 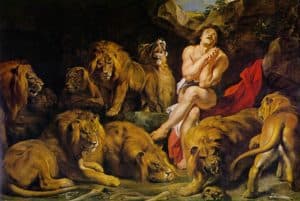 Daniel is saved and Darius punished the satraps. The writer seems to enjoy the satraps getting their punishment. Remember though this is not necessarily God’s view but that of the writer, a member of a downtrodden and abused people. Despite a sentence of death and the clear example, the lions were hungry and capable of killing. God is in control. The future is his. In Darius there is the similarity to Pontius Pilate, both powerful men unable to save the victims of false charges. Both were at private prayer, and both powerful men tried to save those falsely accused. Tim shared some pictures from the catacombs showing imagery drawing the same comparisons. We see the power in Jesus the Risen one. God shows up to take care of his faithful people. Hebrews 11 references the tale of Daniel. The disciples obey God rather than men, continuing to preach when they get out of jail. People notice this faithfulness in Daniel and Darius the mighty king shares v26 and v27, coming to the same understanding of the faithfulness of Daniel.

“I issue a decree that in every part of my kingdom people must fear and reverence the God of Daniel. “For he is the living God and he endures forever; his kingdom will not be destroyed, his dominion will never end. 27He rescues and he saves; he performs signs and wonders in the heavens and on the earth. He has rescued Daniel from the power of the lions.”