Ian led worship on 24 February, supported by Mark and Amanda. Yvette brought us the Word today from Luke 6 27:38 . She continues to maintain that connection with her mum as she uses he 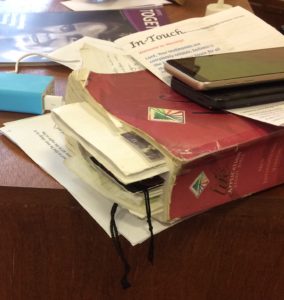 r mum’s well worn battered, bookmarked bible to preach from. It might need some sticky tape every now and then, but a battered well used bible filled with bookmarks and used by successive generations is its own silent testimony!

God’s good isn’t he, this time last week Yvette was stuck on the hard shoulder of a motorway with a broken bonnet and windscreen. Thankfully a new bonnet was found and the dartford crossing was not a problem when friends went to get the new part.

Luke was a doctor and a man of evidence. Luke gives specific instances of reference to women. Luke’s version of the sermon in the mount with four disciples but then talks to those who will listen. People had been hoping for a military messiah and what they got instead was a message of forgiveness, note how God often tells us exactly the opposite we want to hear!!

Why does Jesus tell us to love our enemies. Well it really annoys them, people are more likely to take our side and most importantly it’s what he did for us. Jesus got blamed for things he didn’t do, was denied and yet never gives up on us. He never treats us as what we actually deserve .

Martin Luther King Jr said that “darkness cannot drive out darkness, only light can do that.” Yvette reflected on what her mum used to say about people and their behaviour. “They can come up to my level cos I’m not going down to theirs”

Jesus is asking us to be different, exposing evil in a way that brings change. The Roman soldiers were mostly right handed. They would slap you on the cheek so turning the other cheek actually means you force him to treat you as an equal.

Jesus is talking to the debt ridden poor, people often sued unfairly. The person who takes everything you have is the one who looks bad here. Using the examples he does, Jesus shows how the system is corrupt and how we can change it. Breaking the cycle of insult and violence is what’s matters. But we can often be slow to be kind to ourselves.

Yvette,s husband made mistake with the car bonnet and he’s still beating himself up about it. Yet everyone else sees it as a simple mistake and nothing he needs to be worried about.

We’ve all done things to others or simply got things wrong . Thankfully God accepts us just as we are.

We have the Holy Spirit inside usguiding us. It’s not instant. Think about how long the civil rights movement took in America